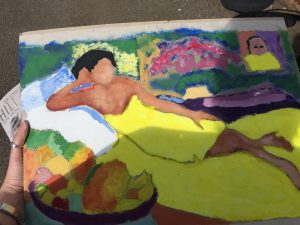 It’s so nice to see my sister up and about and come a really long way from how she used to be. We played snakes and ladders before we had lunch. We shared a couple of sandwiches with my Dad for lunch and we all had a cup of tea and she gave me a big hug and a cuddle.
I managed to lose a pound in weight this week as part of slimming world, I thought it could have gone a little bit further, but on the whole it’s better than putting it on.
I went to College and nearly missed the bus…oops! I was panicking whether I would get the bus or not but I made it. At College I was finishing off my painting of a lady lying on a bowl of fruit.I saw a couple of peacocks in Place for Plants in East Bergholt and I thought it was a bit weird because I didn’t expect to see them there.

I had an interview on camera yesterday. It was interesting because I didn’t expect to do an interview when I came into the Craft Centre that day. It was an interview about my self portrait, the river and what we saw out the train window. It was for the Train project that we’re still trying to tie up. At the end we were trying to read someone else’s writing and the writing looked like seaweed when it was meant to say seaside and teabags when it should have been seaweed.It was very funny and we were all laughing.

Thanks for reading this, hope you’ve enjoyed it.