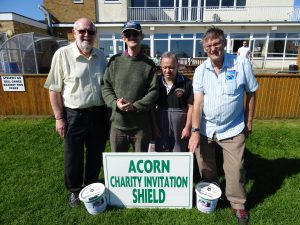 A view from Trinity

Acorn Village Charity cup this weekend, who wants to go is the question, no shortage of volunteers here as Susie, Andrew, Kelly and Pippa all indicate a yes. The day comes, a nice hot Saturday afternoon and we arrive at Brantham Football ground, Hello everyone as we go through the turnstiles, a warm welcome from the people who support us year after year. Programmes were given out and eagerly read, two teams this year were Langham Lodgers who get to final on a regular basis and new boys to the final in Belle Vue Social Club, as we took our place in the stand with familiar faces like Richard and Jess who were also there.

Lots of cheering and clapping from the seats as we were all willing a goal to go in at either end, though Kelly took the opportunity to rest his eyes. Andrew making every decision on the pitch and checking his watch though this could of been in anticipation of a half time cuppa. Susie saying how much she liked the programme as her picture was inside and because her friend Ken was in there too & spoke about how she missed him & Pippa clapping.

Half time drinks came and went and in Susie’s words ‘the boys can go’ when Jess and Brian came seeking volunteers to carry the collection buckets around, Andrew & Kelly did a great job collecting and buckets were much heavier when finished.

With the shouts of ‘come on get a goal’ being heard both teams duly obliged in what I’d call a very competitive game, both teams giving their all to win, with the game heading to penalties up stepped number 20 for Belle Vue with a low drive from the edge of the box late in the game to win 2-1 with loud cheers from team Trinity, the ref blew his whistle and that was that, celebration time.

With everyone there apart from Susie as she said it was someone else’s turn as she did it last year, medals and trophies were given, our seasoned pro Kelly who has presented medals for many a year, Andrew, Pippa and finally Richard did the honours with lots of pictures being taken.

A great way to spend a Saturday afternoon, massive thank you to all involved.